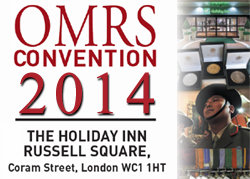 The Orders & Medals Research Society Annual Convention is the highlight of the OMRS calendar for our members. More than 300 members from across the UK, the EU and from overseas came together to celebrate being part the world’s largest organisation dedicated to the research of orders, medals and decorations.

Following the very successful event in 2013, the Convention was once again held at the Holiday Inn, Bloomsbury, London, on 20th to 21st September.

Saturday is the Members’ day at the OMRS Convention and there are two key parts to the programme: the Exhibition and the Presentations.

The Exhibition of Members’ Displays is arguably the most important part of the Convention, as this is where members have the greatest opportunity to learn from each other and to discuss research in depth and in detail. During the course of the day there were many animated discussions around the exhibition tables.

A History of R.E. Units in the Great War – Howard Williamson

The Awards of Imam Shamil – Lion of Daghestan – Owain Raw-Rees

The Army Cyclist Corps in the Great War – Howard Williamson

How Far Do You Go? – Mark Relf

The 2014 line-up of presentations were very popular:

Liam Tarry, Commissioning Editor for the London Gazette – The Digital Transformation of The Gazette

Air Commodore Graham Pitchfork MBE, the Society’s President, announced the award of two Awards of Merit in Gold and one Award of Merit. The members concerned are as follows:

5822 Peter Liversidge was presented with the Award of Merit in Gold for his distinguished and voluntary service to the Society in being a pivotal member of the Journal Editorial team for many years. Peter has always answered questions from any member wishing to submit an article and, over the years, has helped many to write their articles, thus maintaining the very high quality of the Society’s Journal.

1727 Robin Clay was awarded with the Award of Merit in Gold for his long-standing involvement in the organisation and development of the OMRS North Convention. Robin is the Northern Branch’s resident expert on the Boer War, sharing his knowledge with other members, presenting illustrated talks and sharing the duties of provider of refreshments at Branch meetings.

635 Robert J. Scarlett was presented with the Award of Merit for his expertise in photography, his research, his immense medallic knowledge which he generously shares with others, and for being a constant supporter of the Society during his 47 years of membership. He is one of the founders of the Life Saving Awards Research Society and has published frequently in their Journal as well as contributing to numerous publications.