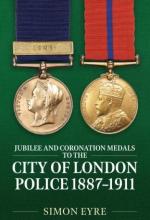 The book provides a comprehensive reference to the Jubilee and Coronation medals issued to the City of London Police Force between 1887 and 1911.
It starts with a fully illustrated description of the four different types of medal that were issued in relation to the Jubilee and Coronation celebrations, together with details of the various numbering and naming styles to be found on the different medals.
One of the main aims of the book is to provide a detailed and accurate medal roll for the medals and the Warrant Books for the period provide the basis for this and the warrant book entries are covered next in some detail.
The structure and development of the Force during the period of the Jubilees and Coronations is then described. Details of the Police stations and the numbers of the various ranks of Officer are given together with information regarding all the senior Police Officers in post at the time of the medal issues.

An analysis of the various awards is provided next including the numbers of the various medals issued and combinations in which the medals can be found. Also, some surviving details regarding some of the Officers on duty are given together with information relating to the Police Officers recalled from retirement to serve at the 1911 Coronation celebrations. Much of this information is published for the first time.
The details of other medal awards to the Force’s Officers of the period are given including issues of the Kings Police Medal. It is also not widely appreciated that a number of Police Officers competed in the Olympic Games between 1908 and 1920 and all those who competed are listed with the events in which they competed and the medals won by them. Finally, brief details of the City of London Police Officers involved in the infamous 1919 Police strike are provided.

A number of City of London Police medal groups are illustrated in the first appendix with details of the men’s service with the Force and colour illustrations of the groups. However, it is the complete medal roll in Appendix II which, in a listing of over 100 pages, gives the full details of the awards to all the Police Officers issued with Jubilee and Coronation during the period. The book provides for the very first time a definitive reference work regarding the medals issued to members of the City of London Police Force between 1887 and 1911 and while this will be invaluable to collectors of police medals, it will also be of great value to other medal collectors while providing as well a very informative account to anyone with an interest in the history of the City of London Police.

Please note that all OMRS published books are now available direct via publisher who can be found at: https://www.helion.co.uk/series/orders-and-medals-research-society.php
Remember if you wish to claim your 20% discount (not just for OMRS authored books but any book published by Helion) you need to log into the members area of our website and make a note of the discount code (found in the Shop/Books area).
More information can be found at: https://www.omrs.org/news/omrs/omrs-book-shop. In collaboration with the publisher the OMRS has started to re-publish some of its back catalogue, so many out of print books are now available again.