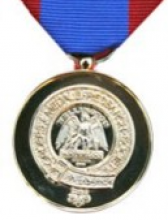 The Honours and Awards Sub-Committee is accepting proposals from members to honour members who have made a significant contribution to the Society and to realising its aims.

Following a major review in 2016 of the Society's honours system, the Society now has three honours: the Distinguished Service Medal, the Meritorious Service Medal and the Commendation Medal.  Nominations for all the awards may be made by any member in good standing.  Such nominations must be seconded by two other members and accompanied by a statement of the nominee’s service.  All nominations are considered by the Honours sub-committee, which meets annually in July.

The Distinguished Service Medal shall be awarded only to those who have been in membership for a period of not normally less than 15 years, and who have a record of distinguished and voluntary service to the Society.

The Meritorious Service Medal may be awarded to members and non-members for highly meritorious service to the Objects of the Society.

The Commendation Medal may be awarded to members and non-members for meritorious service to the Objects of the Society.

The Honours sub-committee may recommend up to three Gold Medals and six Awards of Merit in anyone year. Award nominations may be submitted at any time, but the cut-off date for awards to be made at Convention is 31st May. Nominations should be sent direct to the President, who chairs the Honours sub-committee.  For further information see By-Law No. 2.