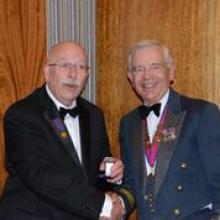 Past General Secretary Peter Helmore has been awarded a bar to the Society's Award of Merit in Gold for his work in organising the IX Meeting of the European Phaleristic Society Meeting. The culmination of two years work, the meeting showcased the very best of British orders decorations and medals for an international audience.

The award was presented by current OMRS President, Air Commodore Graham Pitchfork, at the gala dinner on 30th May 2015 who said "Peter Helmore’s meticulous planning of a complex programme, which encompassed the very best of British heritage and medallic history, was outstanding and one which deservedly attracted fulsome praise from all our international colleagues and members of the OMRS who attended. It further enhanced the reputation of our Society".

Peter Helmore is only the fourth recipient of a bar to the Award of Merit in Gold, the other recipients were Norman Brooks and John Tamplin (1999) and Norman Gooding (2000).