OMRS 2017 Convention returned to Stratford upon Avon for another superb weekend of medal-related activities. The Convention began with a reception for members and guests – a new event – at the hotel on Friday evening. This proved extremely popular with 86 people attending and many of them continued their discussions in the hotel bar or nearby restaurants. It helped create a buzz that lasted throughout the weekend.

As well as the exhibition, Saturday saw three high quality presentations from David Langrish, Head of Public History at The National Archives, on ‘Commemorating Conscription: Papers of the Middlesex Military Service Appeal’, Gurinder Singh Mann, Director of the Sikh Museum Initiative, on ‘Anglo-Sikh Wars: A Journey into Sikh Relics and Artefacts in the UK’, and James Davies from the Ministry of Defence Medals Office, on ‘Honouring History and Inspiring the Future.’

The dinner on Saturday night proved popular with 111 attending and discussions continuing into the wee small hours.

At the Sunday Medal Fair the number of dealers increased slightly from 29 to 30 despite the withdrawal of three regulars who wanted to come but were unable to get to the event.

The Society is delighted to announce the publication of Norman Gooding’s new book Honours and Awards to Women The Royal Navy.

Norman Gooding is one of Britain’s leading experts on honours and awards to women, in addition to being a past President and a long-serving General Secretary of the Orders and Medals Research Society. Honours and Awards to Women The Royal Navy is his third work in a series of such books. Divided into sections on Queen Alexandra’s Royal Naval Nursing Service, the Voluntary Aid Detachments who assisted them, the Women’s Royal Naval Service and the Women’s Royal Naval Reserve, it contains the fruits of a lifetime’s research inone easy-to-use volume. There are full rolls of all honours bestowed on those who served in the separate women’s sections of the Royal Navy until these were absorbed into the main body of the service in modern times. There is also a list of those who received long service medals and a mass of information about campaign medals. The book is a unique reference work.

Available in late March 2017, 155mm x 234mm, soft bound with colour cover, 132 pages, numerous black and white illustrations, ISBN 978-0-9568266-9-5. This limited edition is priced at £5.00 to members (restricted to one copy each) and £10.00 to non-members, plus post and packing. Order and pay using credit and debit cards via the Society website: www.omrs.org Members and non-members may also order by post with a cheque (made payable to ‘OMRS’) via the General Secretary (enquiries to: generalsecretary@omrs.org): PO Box 1220, Spalding, PE11 9FZ, United Kingdom. 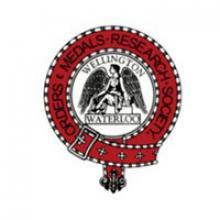 Dahlia Harrison, General Secretary has relocated to Spalding in Lincolnshire. Should members need to contact her by post, her new address is OMRS, PO Box 1220, Spalding, PE11 9FZ. Contact can be made through the website using the Administrative & General heading on the Contact Us form.

A huge amount of knowledge is held by members as a result of their research into their medals and collections. The aim of the Convention Exhibition is to encourage as many members as possible to exhibit in order to present their knowledge and share the results of their research with other members. We hope that as many members as possible will take part and hope they find the exhibition to be an enjoyable, but challenging, experience.

To enable members to present their exhibits in the way most appropriate to the subject there are four exhibition classes available:

Exhibitor Guidelines give clear guidance on exhibiting in each class.

Exhibitors should register to exhibit using the Convention Booking Form.

In addition to the formal exhibition classes, there is the coveted Members’ Choice award where members vote for the best exhibit.

The OMRS announces the publication of two new books: The Ashantee Medal 1873-74 to the Royal Navy and Royal Marines by Nick Tucker and Surgeons of the Royal Navy in the First World War by Simon Jonathan Eyre, will both be available at Convention. 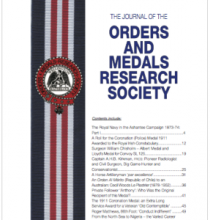 The June edition of the OMRS Journal will be available soon. Members must ensure their email and/or postal address details are up to date in order to receive it.

To check your membership details log into the Members' Area, or if you have forgotten your details contact the Membership Secretary at Membership on the Contact page. 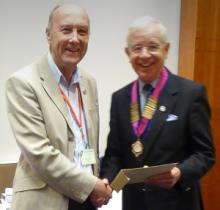 James Kemp’s Gold award and Members Choice winning exhibit goes online. After winning the Members’ Choice Award for a third time James Kemp kindly agreed to convert his exhibit into a format suitable for the website. Click here to see it.

Members are reminded that in order to claim member discounts on OMRS books, journals and ribbons they need to be logged-in to their account. Also, they must be logged-in to purchase items, such as the Membership badge, that are not available to non-members. 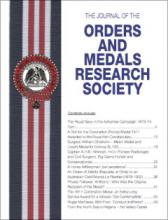 The June edition of the OMRS Journal is now available. Members must ensure their email and address details are up to date in order to receive it.

To check your membership details log into the Members’ Area, or if you have forgotten your details contact the Membership Secretary at Membership on the Contact page. 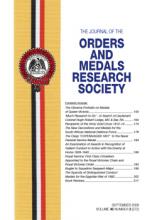 The March Edition of the OMRS Journal is now available. Members must ensure their email and address details are up to date in order to receive it.

To check your membership details log into the Members’ Area, or if you have forgotten your details contact the Membership Secretary at Membership on the Contact page.